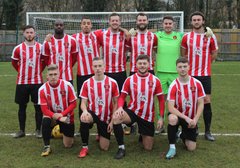 Kempston Rovers bowed out of the Bedfordshire Senior Cup on penalties

Potton United held their nerve in the shootout after a lively, but goalless game at the Hollow on a chilly October evening.

The game began with a spring in its step despite the autumnal feel to conditions, with both sides pressing and maintaining a high intensity to their play. Potton had the first clear cut chance on the quarter hour, when Nzembela, who had spent a trial with Rovers in the summer, was played through but his attempted chip over Carl Knox was less than successful. Midway through the half, Jake Newman snapped a first time shot wide of the post after he combined well with Harry Stratton. Stratton himself then forced Irish into a save after his shot from the left hand side was initially parried. Rovers went into the dressing rooms at half time having had the better of the half, but couldn’t find the all important goal.

Potton began the second half with a flurry of chances, all falling to Nzembela. He forced Knox into two really good saves as the hosts tried to up their game at the start of the second period. Just before the hour mark, a Potton corner was swung in toward Knox. The Rovers keeper spilt the ball and the resulting loose ball was hacked off the line as Kempston cleared the danger. As the game wore on, Potton’s energy levels dipped and their intensity faded slightly, allowing Rovers to regain control of the game. With a quarter hour to go, a long ball from James Sage was nodded down by Jordan Wright, once of Potton, in to Jake Newman, but the usually reliable forward found his lobbed effort drifting over the bar rather than into the far corner. The last meaningful effort on goal of the ninety minutes came from a Kempston corner, Finlay Brennan played the ball to the edge of the box, where Emmanuel Dahie laid it back to Harry Stratton. Stratton wound up and blasted from the edge of the box, but his shot was bravely blocked by Potton bodies and cleared away. With no extra time, the match headed straight to penalties.

Both Gareth Hunt and Finlay Brennan hit the crossbar for Kempston in the shootout, leaving Sims the chance to win it for the hosts. Potton advance to the quarter finals of the Senior Cup, leaving Kempston to concentrate their efforts on turning their league form around. This weekend is a rare day off for Rovers first team, their next fixture is the clash with Bedford Town on November 2nd. The Reserves, however, are in County Cup action this weekend, away to Wilstead.

The Andy Kirby Kit Predictor Game – we said home kit and we were right. [9/10 so far this season]

Player of the match